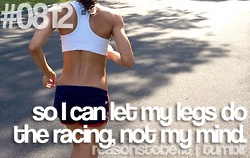 This weekend I ran my first 5k. Let’s just take a moment so I can sit in awe of that statement. Whoa.

My feet hit the pavement at Downsview Park surrounded by people who just seemed to look like they belonged there, with fancy racing clothes, top of the line watches that clocked their running time, told them how many miles they had left, and probably also went on to make them dinner that night. My impostor syndrome was full blown that morning.

Over a year ago, if you had asked me about running a 5k, I’m fairly certain I would have come up with many excuses, some borderline legitimate (I have a bad left knee) to outright outlandish (I don’t have time to train for something like that). Ultimately, there was only one thing standing in my way.

Running this 5k was in many ways the physical manifestation of a mental race I’ve been running for years. Thoughts of not being ‘enough’ of anything, or ‘too much’ of something else have all the athleticism of Olympic marathoners, and years of training mean their strength, speed and stamina have only grown over the years.

With this race, I fought back.

I did not outrun my personal demons on the trail that day, I chose instead to run right beside with them.

I fell into step beside these internal athletes, no longer running away trying to escape but running with them to learn who they were – what motivated them, why they ran, and why they continue to race.

Probably around the 4k mark, when I had to be told, much to my surprise, that there really was only 1k left (only being a relative term), I realized something:

Putting these ideas about myself on a pedestal did not make them unattainable or more powerful, but actually made them more unstable.

The higher the pedestal, the narrower and more unstable the platform a belief, ideal or person has to stand on. It then takes very little (like, say, a short 5k race) to topple them and bring them back to reality. After running beside them for a while, I ran right through the ‘I can’t, I won’t and I never’ and crossed the finish line with my new running buddies ‘I can, I did and I will again’.

What are you keeping on a pedestal? Can you see how tenuously those limiting beliefs are balancing on their narrow platform? Will you run beside them today to meet them, learn about them, and then let them go?

Previous post:
A Libra Without Her Scales: The Myth of Work-Life Balance (Part 2) Next Post:
What Are We Busy About?
about the author: lisaendersby