Yesterday, Tuesday April 2, was World Autism Awareness Day, and the entire month of April is Autism Awareness Month. This is perhaps the first time ever where I have so much as acknowledged it.

My brother, Sean, is 21 years old. He has a very diverse taste in music, ranging from LMFAO to Marianas Trench to Buddy Holly to Sesame Street. He eats just about anything, but only when he feels like it (which is just about all the time). He loves basketball and hates loud noises. He’ll talk your ear off if you let him (the Endersby siblings are quite alike that way), but you may never quite understand what he’s saying.

My brother Sean is autistic.

Sean was born with a series of physical challenges. He had a club foot that required a cast and special shoes for the first few years of his life. (Ask me about how cute I thought it was to get to sign his itty bitty cast when I was little). More seriously, Sean was born with a variation of Craniosynostosis, where the plates of his skull were fused together (rather than being held slightly apart in a more normal newborn’s skull), changing the way his skull could develop as he grew. Before Sean was even a month old, surgeons opened him up and worked to separate pieces of his skull, giving him a chance at a more normal development. He had a pretty rockin’ headband of staples and, as my earliest memory of my little brother reminds me, wires taped all over his tiny body.

We’ll never truly know (and it doesn’t really matter) if that operation so early in his life caused or triggered his autism. All I know now is that Sean is different, very different.

And I wouldn’t have it any other way.

Becoming “fluent in Sean” (if you ever need a star player on a Thomas the Tank Engine trivia contest, just call) has taught me frustration in the bigger moments and joy in the small victories. I’ve seen pain, sure, but I’ve also seen incredible triumph.

But I didn’t speak up yesterday when a whole day was devoted to raising awareness about my brother Sean and this community I don’t think we as a family ever wanted to be a part of.

I’m tired, like Sean is, like my parents are, of explaining away Sean’s differences and advocating for his sameness. It’s exhausting to live in a world where you can feel like everyone knows but no one understands.

And then I thought, if I feel this way, if Sean might feel this way, what about all our students who carry that same burden? Autistic or otherwise, every student we see and every colleague we wish a good morning to has packed their backpack, briefcase or purse not just with pens and wallets but with burdens and demons we may never see. We may see strange behaviours, actions or words that seem ‘weird’ or ‘different’, but those are only symptoms of an often bigger battle being waged just below a smiling surface.

So I let yesterday go without a word because championing awareness of something I still struggle to understand myself didn’t sit right. But I can’t, and probably will never stay silent when it comes to reminding you that we are more than what we say, or don’t say. We are much more than what we do, or choose not to. Stop and think before you tell me my brother is ‘different’. He’s more like you than you may ever know. 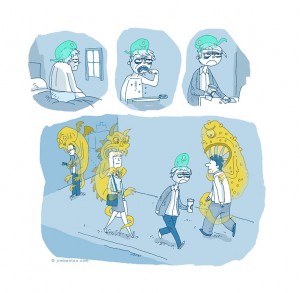 Previous post:
One Is Not Enough Next Post:
Make Your Project Your People
about the author: lisaendersby