The Leader and the Lion

Over the holidays, I had the opportunity to head back to my local museum to take in a special exhibit. Museums, like most cultural institutions, are a fascinating (though sometimes expensive) way to reach across time, space, and geography to share in stories we don’t often see, and may have never known about if it weren’t for the work of professionals with fancy sounding titles that end in ‘gist’.

This particular exhibit was a featured collection of artefacts from Ancient Mesopotamia. The people of Sumer, Assyria, and Babylon were years ahead of their time with innovations in government and business. In amongst the ancient tablets and jewellery, I found a particularly telling artefact of an old definition of leadership that still resonates today. 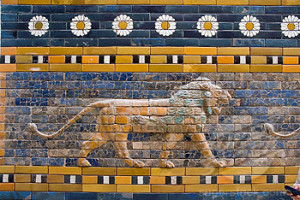 Lions were a prominent feature of Mesopotamian mythology, often used to represent kings and kingship. Most notably, the artefact that I saw (similar to the one pictured above) noted that lions were so closely related to the idea of kings and royalty because they represented wild chaos, the antithesis of the order and control the king strives for.

Such a dichotomous definition of leadership, it seems, has deep, historical roots. The image of a wild, untamed lion being the opposite, or even the enemy, of the king’s desire for stability implies that a leader’s role is to create, keep, and restore order. In hunting and killing the lion, the king dispatches the symbol of a threat to his absolute rule.

The notion of chaos being a threat to a leader’s rule is a puzzling yet understandable concept. Understandable in the sense that leadership and leading can depend on familiarity and stability to support authority and predetermined power structures. Puzzling, however, that the lion is hunted down and killed, showing an extreme fear of the ultimately natural state of instability, change and turmoil. Change, yes, can be chaotic and confronting, but it is striking that the perceived solution for ‘fixing’ these situations is an ultimately even more chaotic act. Fighting to keep chaos away by introducing it yourself seems, on the surface, rather counterproductive.

In a way, however, the lion hunt (this metaphorical hunt for and dispatching of disorder) is controlled, organized chaos. It is an attempt to control, to manage and to fight off a perceived threat to the leader’s perception of what stability and order should be. Here, context is everything. What looks like chaos to us is control for the lion. What seems wild and untamed from the palatial grounds of the leader is, in fact, a perfectly productive way of life.

How many times does this happen to us? Do we fight off what we find threatening as leaders with the same things we fear? Do we introduce our own form of chaos to regain control? Further, what is chaos? What is out of control for us may be stability for someone else. In my world, chaos and change is still frightening, but no longer unwelcome. They are catalysts for change when we need to be more than lightly pushed to accept that change will come. It is not always the best or most welcome way to begin again or learn a hard lesson, but as nature has shown us time and again, the more we hunt and dispatch perceived threats, the more than continue to reappear, often stronger and in greater numbers. What if we used the energy we expend in fighting, running and hunting to observe, embrace and learn? What a different world it might be.